I had learned just recently that certain of the Marietta (Ohio) Hopewell earthworks were built to align with sunset on the winter solstice. They formed a 2,000 year old astronomical observatory system. William F. Romain documented this with measurements in his book Mysteries of the Hopewell. The book displays a cover photo – taken by the author on December 21, 1996 – of the winter solstice sunset at Sacra Via in Marietta: 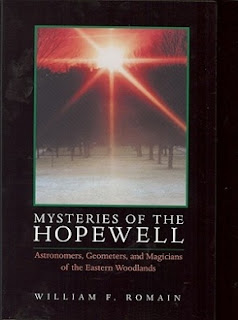 December 21, 2015, the usual date for the winter solstice, was overcast and cold. It was definitely not sunset viewing weather. Luckily for us the winter solstice for 2015 was on December 22, a sunny and clear day. I decided at the last moment to view this event for myself.
My grandson Connor was visiting with us. The two of us drove to Camp Tupper, the park where the Quadranaou mound is located. I was surprised to find a sizable group of people standing atop the flat mound. They were clustered along the axis line on the mound where the setting sun at that moment was, just as advertised, perfectly aligned. I was transfixed. It was awesome, in the true sense of that word. 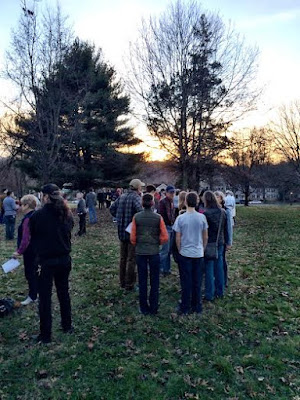 Photo by author on December 22, 2015 on Quadranaou mound. The group in the center foreground is roughly lined up on the axis pointing to the setting sun.
Folks were watching, taking pictures, gesturing, and chatting with each other. Many were talking with Wesley Clarke, a local archaeologist, who had presented a program and was now answering questions. He handed out a copy of the Charles Whittlesey map of the Marietta earthworks published in 1837, a portion of which is shown below. 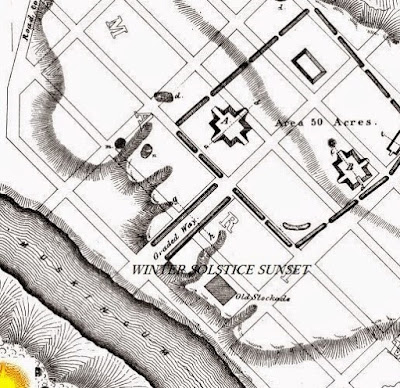 Above:Photo by author of map distributed by archaeologist Wesley Clarke on December 22, 2015. The map is based on an original drawing (see image below) published in 1837 commonly attributed to Charles Whittlesey, but which author Romain believes was done by Samuel R. Curtis, a civil engineer for the State of Ohio at the time.

Below: full version of the drawing, from Squire and Davis, Ancient Monuments of the Mississippi Valley. 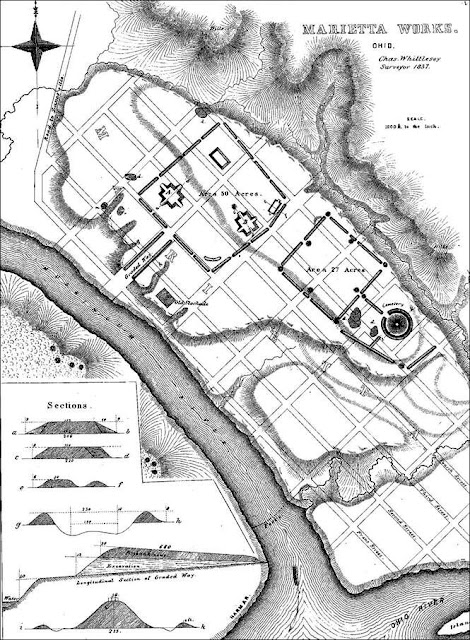 The Marietta Earthworks is a group of mounds, embankments, and open paths which occupied a major portion of the original town. There were two large structure groupings (which appear as squares in the bottom drawing) and the graded pathway (Sacra Via) to the Muskingum River. There were also earthworks at other locations in the Muskingum River valley. They were part of extensive earthworks throughout the eastern U.S. credited to the Hopewell civilization which flourished from 100 BC to 500 AD.
Look at the top drawing above to visualize the sunset alignment. Find the rectangular mound with an extension on each side – marked A. That is the Quadranaou mound in Camp Tupper park. The line connecting the two side ramps pointing towards the river is the axis to the sunset. Find the mound marked B, to the right of A. That is the Capitolium mound where the public library now stands. It too lines up with the sun and so also does the Sacra Via parkway connecting the large square to the river – labeled “Graded Way” in the drawing.

William F. Romain’s solstice sunset calculations are meticulous and fascinating. He compares expected calculations of the sunset direction – based on the latitude and estimated age of the mounds – to the current orientation of the mounds today. The calculation is adjusted for the height of the opposite ridge (Harmar Hill) where the sun “sets” over the hill.Here is his narrative: “…from Aveni’s tables* we find that given a date of A.D. 250, 39 degrees 20 minutes north latitude, lower limb tangency, and a 7.0 degree horizon elevation, the winter solstice sun would have set at an azimuth of 231.3463. Recall that the azimuth of the Quad Mound’s minor axis is 231.5. Accordingly, the Quad Mound is aligned to the winter solstice sunset to within two-tenths of one degree (231.5 – 231.3463 = .153 degree.” Pretty, close, eh? There are similar computations for the Capitolium Mound and Sacra Via.

John E. Hancock of the University of Cincinnati has studied many Hopewell earthwork structures. He notes that: “Studies of the (Hopewell) earthworks indicate that the builders had a remarkable understanding of mathematics and geometry, a deep knowledge of astronomy, a common unit of measure, and reliable methods of surveying. It also indicates that the Hopewell people did not lay out their earthworks in a haphazard manner. They built them according to a predetermined plan that incorporated the cyclical movements of the sun, moon, and perhaps the planets and stars as well.”

The Marietta earthworks are in a select group of structures built by civilizations around the world that marked solstice solar and lunar events. Newark Earthworks in Ohio is one excellent example among Hopewell structures. There are numerous examples from other civilizations, including Stonehenge and the Glastonbury Tor in England, the pyramids of Egypt, the Goseck Circle in Germany, Chichen Itza in Mexico, the four-handed Moai statue on Easter Island, Newgrange in Ireland, the Temple of Karnak in Egypt, and many others. Many of these involved intricate construction to measure or exhibit the event. Learn more by clicking on this website: Ancient Sacred Sites Aligned to the Winter Solstice.The amazing thing to me is that so many different civilizations noticed the solstice/equinox cycles, considered them important, and created structures to observe them. All of this occurred independently, since many of these cultures presumably did not interact with each other.

Much of Marietta’s earthworks network has been destroyed over the years. We are fortunate that some major features have been preserved. They remind us today of our unique heritage, hiding in plain sight and often taken for granted, shared with ancient cultures around the world.