If you have been in Mound Cemetery or walked around at Camp Tupper Park in Marietta, Ohio, you have seen a major feature of the Marietta Earthworks. They are remnants of the vast Hopewell civilization which flourished from 100 BC to 500 AD in the eastern U.S. These impressive structures were abandoned and sat dormant for centuries. The earthworks were brought back to life at Marietta in the late 1780’s – this time as objects of curiosity by settlers from the eastern U.S.The Earthworks was a system of mounds, embankments, and open paths which occupied a major portion of the original town. Below is a map of the earthworks as drawn in the 1830’s. You’ll notice a large square, a smaller square, the circular Conus mound, and the graded pathway to the Muskingum River. 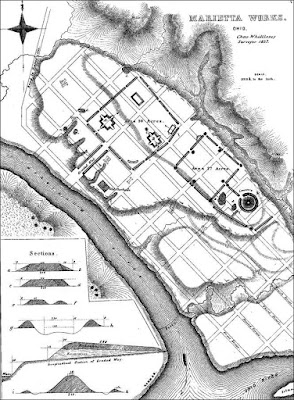 CLICK TO ENLARGE
Map of Marietta Earthworks from Moundbuilder.blogspot.com; originally credited to Charles Whittlesey in Squire and Davis, Ancient Monuments of the Mississippi Valley, but which researcher William F. Romain believes was done by Samuel R. Curtis, an engineer with the State of Ohio at the time, about 1837.
Marietta earthworks were the first in America to be documented
The earthworks were, except for a sketch of earthworks at Circleville in 1772, the first to be documented in America. That they were even noticed is remarkable considering the thick forest that blanketed the entire area.Joseph Buell, stationed at Fort Harmar, mentions them in his journal, on February 1, 1787:…”this day I took a walk with Serg’t Shaumburgh, Strong Orcatt, & Munsell to view the curiosities of the mountains which afforded us great Satisfaction….” The term “curiosities” reflected early reactions at the time to the earthworks – a blend of awe, scientific enigma, and UFO-like mystery. 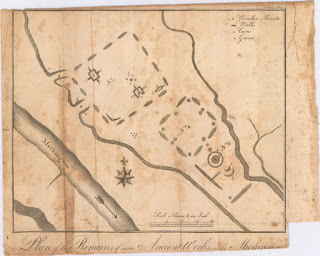 CLICK TO ENLARGE
Image of Heart’s drawing, at Christoper Busta-Peck Flickr website: https://www.flickr.com/photos/cbustapeck/19577659676/in/photolist-vQ1C9u-bXbbhe-dT6Zg7-cx5e8S
The first detailed drawing, circa 1786, (see above) is attributed to Captain Jonathan Heart, also a soldier at Fort Harmar. General Josiah Harmar, the fort’s namesake, wrote to General Thomas Mifflin of Philadelphia: “Be pleased to view the inclosed plan of the remains of some ancient works on the Muskingum, taken by a captain of mine (Heart), with his explanations. Various are the conjectures concerning these fortifications. From their regularity I conceive them to be the works of some civilized people. Who they were I know not. Certain it is, the present race of savages (American Indians) are strangers to anything of the kind.”

Heart’s drawing and notes generated considerable scholarly interest in the east. General Samuel Parsons had toured the Ohio Valley, and had studied the Grave Creek Mound (at Moundsville, WV) and those at Marietta. In May 1786 Parsons sent his mound data (including Heart’s drawing and notes) to Ezra Stiles of Yale University. Stiles forwarded the Marietta earthworks data to Thomas Jefferson and to Benjamin Franklin for their opinions on the their origin. In October of 1786, Parsons sent similar information to President Joseph Willard of Harvard University.Noah Webster wrote a letter to Stiles supporting a theory, first mentioned by Benjamin Franklin, that the Marietta earthworks were built by Spanish explorer DeSoto during his 1539 expedition. Heart’s map appeared in the May, 1787 edition of Columbian Magazine – shown below. To recap: Harvard, Yale, Thomas Jefferson, Benjamin Franklin, Noah Webster and others expressed genuine interest in curious piles of earth in Marietta, Ohio. Pretty impressive. 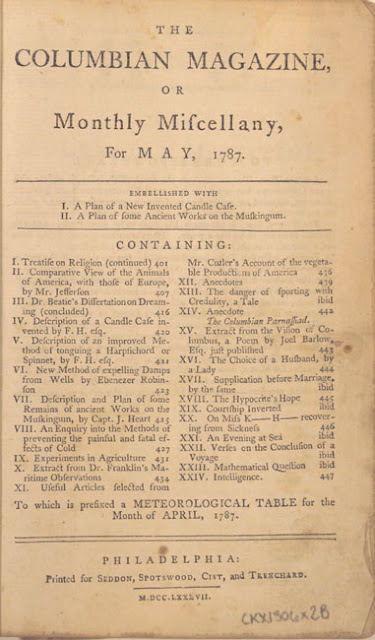 Image of Columbia Magazine May 1787 issue which lists Captain Jonathan Heart’s drawing in the index. It appears as Roman Numeral VII in the list. This image is from Archive.org at
https://archive.org/stream/columbianmagazin17861787phil#page/400/mode/2u
Ohio Company was proactive in research and preservation
The Ohio Company of Associates were the organizers of the settlement of Marietta. Their leaders surveyed the earthworks, recognized their historical significance, and prudently took action to protect them. Rufus Putnam, Superintendent of the Ohio Company, conducted a detailed survey of the earthworks. Images of his work are below. 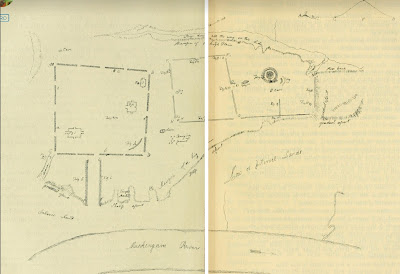 CLICK TO ENLARGE
Rufus Putnam’s drawings of the mounds and earthworks and notes below, from
The Memoirs of Rufus Putnam and Certain Official Papers and Correspondence 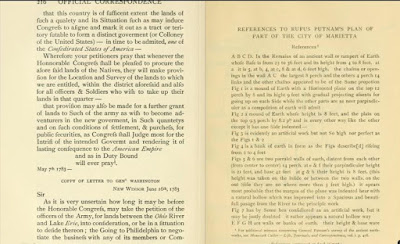 CLICK TO ENLARGE
References to notes (on right side of the image above) on Rufus Putnam’s drawing
Manasseh Cutler, a member of the Ohio Company and an ordained minister with scientific training, also closely observed the mounds. He estimated their age by counting tree rings on some of the largest trees growing on them. The largest tree was 462 years old. There were other large stumps visible, indicating preceding growth of a similar length of time. From this he estimated that the mounds were at least 1,000 years old. This finding allowed him to refute Noah Webster’s DeSoto theory.
The earthworks were considered part of the town. They were given Latin names by the Ohio Company: Quadranaou for the largest mound at Camp Tupper, Capitolium for the one at the Public library location, Conus for the Mound Cemetery mound, and Sacra Via for the parkway leading from Third Street to the Muskingum River.
The groupings of earthworks (refer to the Whittlesey drawing above) also had informal titles. The largest square enclosure was “The Town,” the smaller square “The Fort,” the cemetery mound was the “Great Mound and Ditch,” and Sacra Via was the “Covered Way.”
Preservation efforts – success and failure
The Quadranaou, Capitolium, Conus mounds and Sacra Via parkway were set aside as protected common areas by the Ohio Company: “Resolved, That Colonel Battelle, Colonel Crary, and Major Sergeant be a committee to lease the public squares (to Samuel H. Parsons, Rufus Putnam, and Griffin Green, esqs.), the ones on which the great mound (Conus), the Quadranaou, and Capitolium,….The committee are to point out the mode of improvement for (beautification), and in what manner the ancient works shall be preserved….”
Those earthworks were thus leased to individuals for safekeeping. Sacra Via was under the informal supervision of Rufus Putnam. This system was continued over time, but there were serious lapses. Conus was set aside as a cemetery, but it was not fenced for decades. The mound suffered serious erosion from sheep and people climbing the mound – compounded by water runoff. The mound was eventually repaired and fenced.
In 1820, Quadranaou was being leased to D. Hartshorn who transferred control to Rev. Joseph Willard. Incredibly, Willard started plowing down the mound! Fortunately, there was a public outcry. A legal wrangle ensued, but courts sided with the city’s control of the property. Willard was removed and citizens worked to restore the damage.
The special case of Sacra Via
Sacra Via (Latin for Sacred Way) was the excavated graded pathway from Quadranaou to the Muskingum River. It was to be protected…”never to be disturbed or defaced, as common ground, not to be enclosed.” But the large boundary walls were destroyed in a regrettable lapse in governance. A city council member, who was a brickmaker, talked the city council into selling the earthen walls to him for bricks. The bricks were reportedly used in the construction of the Unitarian Church.
The original Sacra Via earthwork was a dominant structure, quite different from the level park of today. Parallel earthen walls bounded the Sacra Via parkway for a  length of 680 feet. The rounded walls were nearly 40 feet wide and 8 ft high. The interior pathway descended uniformly toward the river, and was excavated below the surrounding terrain. The pathway was 8 ft below grade at the upper end but steepened to 18-20 ft near the river.
The effect was dramatic. Someone standing in the lower pathway would have been looking 20+ ft upward to see the top of sidewalls. Some theorized that the below grade section was for a defensive military feature to allow an undetected avenue of escape to the river. A Charles Sullivan charcoal drawing of the scene (below) conveys some of the visual effect. We know boundary walls were used for bricks, but what happened to the graded excavation? It’s barely discernible now. 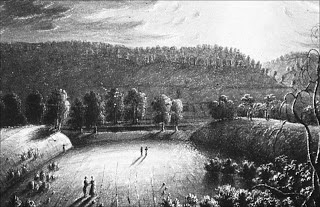 From Ohio History Connection Archaeology Blog: “It’s that most wonderful time of the year”, Dec 13, 2010
Americanantiquarian.org.: Ancient Works, Marietta, Ohio. Based on a painting, this lithograph shows the (Sacra Via) elevated plain with elaborately constructed fortifications. “Ancient Works, Marietta, Ohio,” in Ephraim G. Squier and Edwin H. Davis, Ancient Monuments of the Mississippi Valley(Washington: Smithsonian Institution, 1848), pl. 26, p. 73.
The challenge of protecting our heritage
Unfortunately, much of the original Marietta Earthworks network of extensive boundary walls and smaller mounds has been destroyed over time. These were on private property, not in protected areas.

Fortunately, enough of the major features remain for us to realize their importance, uniqueness, and cultural value. But there will always be preservation challenges – from wear, erosion, and land use changes over time. It is imperative that we remain faithful stewards in protecting them and in pressing for additional research about them.