Two shots rang out in the early morning mist above the towering Palisades on the Heights of Weehawken NJ. It was July 11, 1804. Alexander Hamilton lay mortally wounded, shot by Aaron Burr in a duel. Hamilton died the next day. The aftermath of the duel would soon be felt in the Ohio Valley.

CLICK ON IMAGE TO ENLARGE
Aaron Burr Portrait, from wikipedia
Burr the enigma
Aaron Burr was then the sitting Vice President of the United States. The duel brought his already fading political future to an end. He finished his term as Vice President in early 1805. After leaving Washington, Aaron Burr redirected his energy to seeking fame and fortune in the West (then considered to be any land west of the Appalachian Mountains). His controversial efforts would involve many in the Marietta community and thrust the area into the national spotlight.
Aaron Burr was an enigma -intelligent, accomplished, and well-connected – but with a dark side. He was a successful lawyer, served with distinction in the Revolutionary War, and a prominent politician. In politics, Burr was a chameleon, changing views and making deals according to his own benefit. Most distrusted him. He was called the “modern Machiavelli.”
“Glory and Fortune”
The details of Burr’s “Conspiracy” were never fully disclosed. But he was thinking big, and seeking “glory and fortune” that he mentions in a letter. The primary goal was the creation of a new republic in the western territories or Mexico, instigated by war with Spain or a paramilitary invasion. His campaign played out over two years, culminating in his arrest and trial for treason in early 1807.
In early 1804 General James Wilkinson, then head of all U. S. Army forces, met secretly with Burr. What they discussed is not known, though Wilkinson had a long history of interest in military interventions in the Mississippi Valley.
Soon after, Burr contacted England’s ambassador Anthony Merry offering to help England “effect a separation of the Western part of the United States” from the eastern states. He was short on details but long on promises of benefits to England. Merry notified the English foreign office via an encrypted message and marked “Most Secret.” This was the first documentation of what Burr said he intended to do.
In the spring of 1805, Burr embarked on a fact-finding tour of western territories. He wanted to learn the attitudes of locals and recruit people to his cause. He would promise prosperity and independence for citizens in the western territories to potential recruits. He made it all sound legitimate and patriotic.
Starting Westward – Marietta connections
On April 30, 1805, Burr and assistant Gabriel Shaw started down the Ohio River from Pittsburgh in an elaborate 60 foot long houseboat. It was equipped with a dining room, kitchen with fireplace, and two bedrooms. He would visit people at Pittsburgh, Marietta, the Harman Blennerhassett estate, Cincinnati, Nashville, and Louisville before continuing down the Mississippi River to New Orleans.
He reached Marietta on May 5, 1805. Aaron Burr records notes from the visit in his journal:

On the morning of the 5th reached Marietta…containing about 80 houses; some that would be called handsome in any village on the continent. After breakfast…came in several gentlemen of the town to offer me civilities and hospitalities. We have been walking several miles to see the mounds, parapets, squares, and other remains of unknown antiquity which are found in this neighborhood. I am astonished and confounded….

He was impressed with the Marietta earthworks, a topic somewhat removed from his intelligence gathering mission.
Just below Marietta, Burr stopped to see Harman Blennerhassett at his idyllic island estate. He was away at the time. Blennerhassett was a wealthy immigrant from England who settled with his wife Margaret in 1798 on Belpre (later Blennerhassett) Island in the Ohio River. This contact would bring Burr’s conspiracy directly to Marietta. 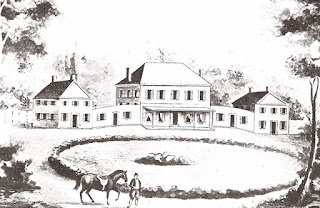 CLICK ON IMAGE TO ENLARGE
Blennerhassett Mansion circa 1800, from the book Historic Blennerhassett Island Home, by
Alvaro F. Gibbons

Burr continued his trip, meeting with prominent people, listening to local attitudes, and promoting his plans. At Cincinnati he met with Senator John Smith and Jonathan Dayton, former senator and friend. He detoured over land to Nashville to meet future president Andrew Jackson, then a major general of the Tennessee militia.

Burr continued on to New Orleans where he was feted by local dignitaries. He met with the Mexican Association, a group who sought emancipation of Mexico from Spain, and planted seeds that separation from eastern states was part of the Mexican campaign.
Reports about Burr’s activity went viral across the region. Daniel Clark, a New Orleans merchant, wrote Wilkinson that “Many absurd and wild reports are circulated here and have reached the ears of the officers of the late Spanish government regarding (Burr)….” The Gazette of the United States featured stories circulating about Burr’s plans – expressed as rhetorical questions. Some are listed below. With this kind of publicity, Burr’s intentions were no longer secret.
On his return trip from New Orleans, he again stopped in Marietta in late October, 1805. He met with local dignitaries including Return Jonathan Meigs, Jr. and Edward Tupper who was clerk of the common pleas court, a boat builder, and mercantile store owner. After Burr left, Tupper wrote him requesting a command in the army if war with Spain occurred. Burr wrote back in January of 1806 assuring Tupper that he would be invited and asked him to recruit others. He also mentioned  that …”I have lately procured for a few of my friends a few copies of The Duty of A Soldier and Decipline of the Infantry as now practiced by the French Army….and have reserved a sett for you.” (spelling as noted in the document quoted). The book was delivered to Marietta by Major Davis Floyd, an ally of Aaron Burr. This was a fascinating example of Burr’s attention to detail.
The Blennerhassett connection
In December of 1805, Burr wrote a letter to Harman Blennerhassett inviting him join in Burr’s grandiose plan – with the opportunity for wealth and prominence. Blennerhassett responded on December 21, 1805, effusively offering help in Burr’s adventure, “…I should be honored in being associated with you in any contemplated you would permit me to participate in.” Blennerhassett was characterized by his friends as a decent person but “having every kind of sense except common sense.” He had no business, military, or political experience, yet Burr relied heavily on him for needed logistics (through Marietta connections) and financial support. 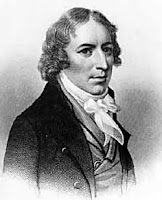 CLICK ON IMAGE TO ENLARGE
Harman Blennerhassett from Ohio History Central viewed at ohiohistorycentral.org
Seeking money, men, and armor
Burr’s planning went forward in late 1805 into 1806. Efforts to obtain help from England then Spain (by trying to play one against the other) were unsuccessful. Burr continued promoting his plan to others, including Wilkinson, Thomas Truxton, and William Eaton. The latter two were disgruntled military officers. He offered them commands in his expeditionary force. Burr boasted to Eaton that he would effectively take over the U. S. government. This prompted Eaton to meet in person with President Jefferson in April of 1806, stating that “Colonel Burr should be removed from the country” because of his treasonous intentions.
The cipher letter: “I have commenced the enterprise”
Burr sent an encrypted message in July 1806 to Wilkinson using a code in which numerals are substituted for letters. His use of code is amusing since most of the country and the President already knew of Burr’s intentions. The letter announced that Burr had “commenced the enterprise” and that “detachments from different points and under different pretences will rendezvous on the Ohio (River)” on November 1. He also said that troops would be at Natchez in early December to meet Wilkinson. “The gods invite to glory and fortune,” Burr exclaimed. The letter was cited as evidence in Burr’s trial. 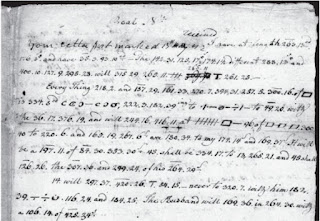 CLICK ON IMAGE TO ENLARGE
Beginning of cipher letter from Burr to Wilkinson dated July 1806, from “Burr’s cipher, sir: The 1807 treason case that featured in the Apple/FBI conflict,” macworld.com
Preparing for the mission
In August 1806 Burr began another trip down the Ohio River to set his plans in motion. His first stop was to see his friend, Colonel George Morgan, in Cannonsburg, PA, believing Morgan to be sympathetic to his views. Colonel Morgan was shocked when Burr suggested that the western states would soon be separated from eastern states. Colonel Morgan and his sons were alarmed at Burr’s rebellious talk and wrote a letter of warning to President Thomas Jefferson.
Burr next stopped at Marietta. Again he met with local dignitaries and even led the militia a few drill exercises. This allowed him show off to locals and attract a few recruits in the process. He also met with Harman Blennerhassett, Dudley Woodbridge, Jr., and others to work out logistics for the expeditionary force. 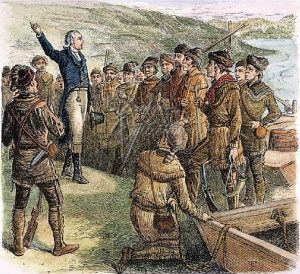 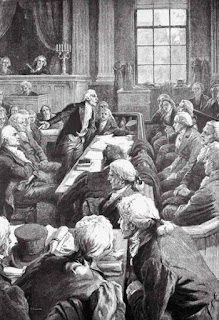 CLICK ON IMAGE TO ENLARGE
Scene from Aaron Burr treason trial
http://potus-geeks.livejournal.com/516176.html
Several Mariettans were deposed or appeared as witnesses in Richmond for the Burr trial. Soon after, the Burr episode faded into historical obscurity, perhaps to the benefit of the Marietta area’s reputation.
The Blennerhassetts never returned to the island and eventually were forced by financial stress to return to Europe. The mansion burned in 1809.