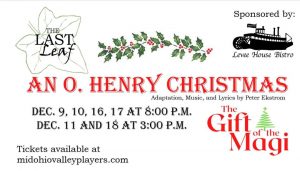 An O. Henry Christmas is made up of two one-act musicals based on the classic O. Henry stories “The Last Leaf” and “The Gift of the Magi,” stories that capture the spirit of giving. The show is set in turn-of-the-century New York City. Performance dates are December 9, 10, 16, and 17 at 8:00 p.m. and December 11 and 18 at 3:00 p.m. Tickets are $13 and are available at midohiovalleyplayers.com or at the box office 90 minutes prior to curtain.

“The Last Leaf” is the story of two impoverished young women, Sue and Johnsy, who are struggling to become established artists in Greenwich Village in New York in 1905 and how their aspirations are threatened when one becomes ill with pneumonia. A combination of faith, prayer and strong chicken soup turns the tide, but not before a life allows itself to be selflessly given up in place of another.

“The Gift of the Magi” is the classic O. Henry short story. Through music and lyrics, the show tells the story of young Della and Jim who love each other so much, each sells their most prized possession to buy the other a Christmas present. Their special gifts bring a touching reaffirmation of their unselfish love.