Today our post comes from Early Marietta’s blog be sure to check his page out at this link:  http://earlymarietta.blogspot.com/
At 10:30 pm in Washington D.C. on July 7, 1938, the President of the United States boarded the “Presidential Special” train bound for Marietta, Ohio. Franklin Delano Roosevelt would speak in Marietta on July 8 to dedicate the “Memorial to the Start Westward of the Nation” marking the 150th anniversary of the establishment of theNorthwest Territory and settlement of Marietta, Ohio. Wow. It was a big deal for a small town.
The Sesquicentennial Celebration, as it was called, had been years in the planning. FDR’s visit would be the pinnacle of a series of events from July 8-16, 1938. Those included a reenactment of the voyage of the original settlers from Ipswich, MA to Marietta in 1788, an outdoor drama presentation “Stars in the Flag,” an air show at the Marietta Municipal Airport (located then where Walmart is now), monuments in Muskingum Park and on Front Street, parades, speeches, and more.
Roosevelt’s visit was brought to mind by a comment from my uncle, Dan F. Baker, who was there for the FDR speech. The President’s train arrived on time at 8:45 am, having traveled to Parkersburg WV, through Harmar, across the Muskingum River on the railroad bridge, and then into Union Station along Second Street. The ten car train included about 20 of the President’s aides, his personal physician, and friends. There were 27 reporters and 9 photographers. There were also 6 staffers from NBC and CBS plus 3 telegraph operators. Most of the press party represented print media. The network staffers were radio broadcasters; there was no TV or internet yet.
Just before 9:00 am, FDR emerged on to the rear platform of the coach. A cheer went up from the large crowd gathered there. Roosevelt, who suffered from polio and had braces on legs, was assisted into the Presidential car, a Lincoln V-12 touring car brought to Marietta earlier. The entourage wound its way up Second Street to Washington Street, then to Front Street and finally to Muskingum Park for the speech.
Uncle Dan’s narrative gives us the setting:

I was 15, a junior high student at Marietta High School. Students were excused from class that day. FDR’s son in military uniform helped his father up a ramp to the lectern. I was very close to the ramp (and)… could see that FDR had metal braces on his legs.  I heard them “clank” as he passed near me. I think my friend Jack Lowe was with me.  (When) FDR dedicated the Gutzon Borglum (he also sculpted the figures on Mount Rushmore) monument, “Memorial to the Start Westward of the Nation”,….we all moved down the park near the river to see it more closely.  The speech platform was nearer Front street, as I remember. 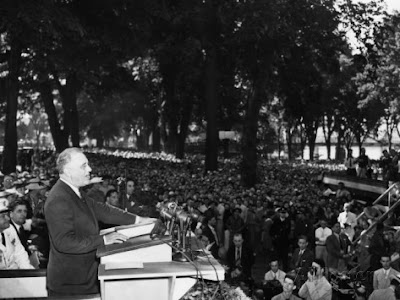 Photo from allposters.com
It was a pretty memorable day for him and thousands of others.

The President spoke for about 20 minutes. “Two old friends of mine, Bob (Senator Robert) Bulkley and Bob (Congressman Robert) Secrest invited me to come to Marietta in 1938. It seemed a long way off. I told them I’d come if I possibly could. So here I am.” FDR’s speech honored the pioneer spirit of the original settlers. He also noted the significance of the Northwest Territory expansion of the nation’s borders and its forward-looking governance provisions. 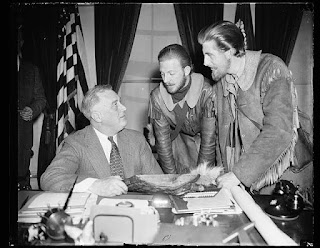 PRESIDENT MAY ATTEND NORTHWEST TERRITORY CELEBRATION AT MARIETTA, OHIO. WASHINGTON, D.C. MARCH 21. AFTER RECEIVING A WOODEN PLAQUE MADE FROM THE OAK THEY ARE USING TO BUILD FLAT-BOTTOMED BOATS SIMILAR TO THOSE IN WHICH THE PIONEERS FLOATED DOWN THE OHIO RIVER, PRESIDENT ROOSEVELT TODAY INDICATED HE WOULD ATTEND THE 150TH ANNIVERSARY CELEBRATION OF CREATION OF THE NORTHWEST TERRITORY AT MARIETTA, OHIO, SOMETIME NEXT JULY. DAVID PETERSON, CHICAGO IL, AND MONTE PARR, MINGO JUNCTION, OHIO, MEMBERS OF AN EXPEDITION REENACTING MARCH OF THE PIONEERS WHO BLAZED THE TRAILS INTO THE NORTHWEST TERRITORY, ARE SHOWN MAKING THE PRESENTATION

The President used the metaphor of “cooperative self help” to describe the early efforts of self government in the frontier settlement at Marietta. “Under such conditions there was so much to get done, that men could not get done alone, that the frontiersmen naturally reached out – to government – as their greatest instrument of cooperative self help…to get things done…..They looked on government not…as a power over our people but a power of the people.”
His speech compared the frontier faced by Marietta’s pioneers in 1788 to a “frontier of social problems” that challenged early 20th century America. He also framed the activist New Deal government role of the 1930s as a benevolent version of pioneer cooperative self help. He then recited some of the New Deal programs that he had championed to combat effects the Great Depression of the 1930s.
The connection of frontier Marietta to the New Deal was a tenuous one, in your author’s opinion. However, it was a artful mix of frontier spirit and political spin. It worked because of the occasion and his praise of Marietta’s courageous settlers.
Other observations about the visit:

FDR’s visit remains a highlight in Marietta’s history and a vivid memory to all who were there.