One of the great mysteries of prehistory concerns the circumstances surrounding the collapse of complex states in the Eastern Mediterranean at the end of the Late Bronze Age. In the course of about one hundred years between 1250 and 1150 BCE, great empires from Egypt to the Aegean and across the Levant declined and fell, under circumstances that remain fascinating and enigmatic, despite a century of archaeological and historical efforts to unravel the causes of the collapse. In this lecture, I set aside the question of what caused the collapse, and instead consider what life was like for some of those who survived to dwell in its aftermath. For, catastrophic as were the disruptions that swept the Mediterranean around 1200 BCE, it is clear that life did go on in their wake. Some communities even seem to have thrived in the aftermath of the collapse, often in unexpected places. My current archaeological research project focuses on one such place – the small offshore islet of Raftis in the bay of Porto Rafti in eastern Attica. I present new evidence for a wealthy trading community on the island of Raftis in the post-collapse Aegean that has been uncovered by the Bays of Eastern Attica Regional Survey (BEARS) project, then consider what these new discoveries might indicate about how the people living on Raftis survived, and even flourished, among an era of general civilizational crisis.

This virtual offering is free. Donations are encouraged. 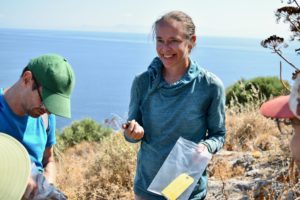 About the Speaker: Sarah C. Murray is currently Assistant Professor of Classics at the University of Toronto. She received a BA in Classical Archaeology from Dartmouth College in 2004 and a PhD in Classics from Stanford University in 2013. Her research interests include the development of Greek economic and religious institutions between the end of the Late Bronze Age and the Early Iron Age (ca. 1300–700 BCE), archaeological survey methods, and the use of quantitative evidence in archaeological research. She has conducted fieldwork at the site of Pompeii in Italy and at many sites throughout Greece, including the Bronze Age harbor site of Korfos-Kalamianos, the Mycenaean chamber tomb cemetery of Ayia Sotira, the transitional Bronze to Iron Age site on the islet of Mitrou, the Mesolithic site of Damnoni and cave art at Asphendou in southwestern Crete, and the agricultural landscape of the Mazi Plain. She is currently the co-director of the Bays of East Attica Regional Survey Project situated around the bay of Porto Rafti in eastern Attica (Greece). Her recent publications include articles on the LH IIIC cemetery of Perati in eastern Attica (in the American Journal of Archaeology, 2018) and the historiography of the Greek Dark Ages (in the journal Hesperia, 2018), and a monograph, The Collapse of the Mycenaean Economy: Trade, Imports, and Institutions, published by Cambridge University Press in 2017. She was born and raised in Marietta, Ohio, and was inducted into the Marietta High School Athletic Hall of Fame in 2018.